If you own a home, Indiana law allows you to protect a portion of the equity in that home. A liquidation analysis determines what would be available for creditors after you deduct the cost of sale and other expenses.
We recently discussed several aspects of bankruptcy with Christopher Holmes and Jess M. Smith, III, partners at Tom Scott & Associates, P.C. The discussion covered several topics, including being “judgment proof,” protecting your house from liquidation in a bankruptcy, home equity exemptions, some benefits of filing a Chapter 13 “100% plan,” common reasons people file for bankruptcy, a deficiency balance on a debt, an example of how an ex-spouse can impact a bankruptcy, and conduit mortgage payments. Below is Part 1 of 2 of the transcript of that conversation.

Retirement accounts are exempt from creditors when filing for bankruptcy, but an inherited IRA is not. A recent ruling extending the time to cure arrearage might help you save your house after a tax sale.

Editor: We recently discussed the changes in the bankruptcy laws with Christopher Holmes, Jess M. Smith, III, partners at Tom Scott & Associates, P.C., along with associate attorney Andrew DeYoung. Below is Part 2 of 3 of the transcript of the conversation.

Q: Can you mention some of the things you can protect and some that you cannot protect when filing for bankruptcy?

Chris Holmes: Real estate. If it is your residence, you can protect up to $19,300 of equity. If it’s a joint filing and the property is owned jointly by a husband and wife, they can protect up to $38,600. Sometimes, when only one of them files, the property owned by a husband and wife is totally off limits to the creditors. That comes in handy sometimes.

Q: Based on cases you’ve dealt with, what are examples of the types of property people will include in their bankruptcy filing?

Andrew DeYoung: 401k accounts. IRA accounts. It can be as general as the clothing on your back. It’s what the exemptions apply to.

CH: But inherited IRAs are not exempt.

JS: It’s complicated and that’s why you should consult with an attorney.

CH: In general, retirement accounts—IRAs, 401Ks, defined benefit pension plans—are exempt, off-limits, no matter how much money is in there. But there was a recent decision where someone inherited a person’s IRA. The person who had the IRA died; someone inherited the IRA. The person who died could have protected that in its entirety from his or her creditors, but when it was inherited by the recipient—the debtor— it wasn’t off-limits to the creditors. It became subject to being taken and liquidated for the benefit of the debtor’s creditors.

Q: Was this decision a case you worked on or a precedent-setting case?

CH: It was a precedent-setting case in the 7th Circuit Court of Appeals in 2013, Clark (debtor) v. Rameker (trustee), in which a decision was made by the judges that an inherited IRA is not exempt in certain circumstances. (ed., The Supreme Court affirmed this decision by unanimous vote in 2014: Funds held in inherited Individual Retirement Accounts are not “retirement funds” within the meaning of 11 U.S.C. §522(b)(3)(c) and therefore not exempt from the bankruptcy estate.)

JS: And there was the case of someone buying a new car on the eve of bankruptcy to protect the lien, or affecting the lien. If the creditor does not affect the lien on the title, sometimes the trustee can take the car itself.

CH: Right. I recently had a case where right before the people came in to sign the paperwork, just two days before, they went out and bought two cars. So I had to change the paperwork and their list of creditors, but then the problem was that we had to know for certain that the creditor had put their lien on the title to each vehicle—and they had to do that within 30 days of whenever the people got the car. Otherwise, in a Chapter 7 bankruptcy, or even in a Chapter 13, the trustee could void the lien, take the car and liquidate it. Unless we did something else to prevent that, we would have to wait 91 days from the transfer of the title to file the bankruptcy. Otherwise, it creates what’s called a “preferential transfer.” With that situation, a trustee could set aside that preferential transfer and try to confiscate and liquidate that car.

There is another recent precedent-setting case that has changed in bankruptcy law. Previously, when a house had been sold by the county treasurer for delinquent taxes, the debtor had one year to redeem the property—pay the taxes plus a rate of interest—to keep the house from going to the tax sale purchaser. In the bad old days, we would have to tell people, "You’ve got to file a Chapter 13 bankruptcy before the tax sale to get the benefit of the three- to five-year Chapter 13 plan, to cure that real estate tax arrearage and save the house. If the tax sale had occurred, we couldn’t use a Chapter 13 plan to give them three to five years to cure that problem. They still had this one-year statutory redemption period, but luckily one of our judges, Judge Carr, ruled that you can now use a Chapter 13 plan after the tax sale has taken place to force everyone to back off for three to five years, to give that debtor ample time to cure that arrearage. So that is a new development we can use to save houses after tax sales.

Part 1 of Interview: What’s New in Bankruptcy Law in Indiana 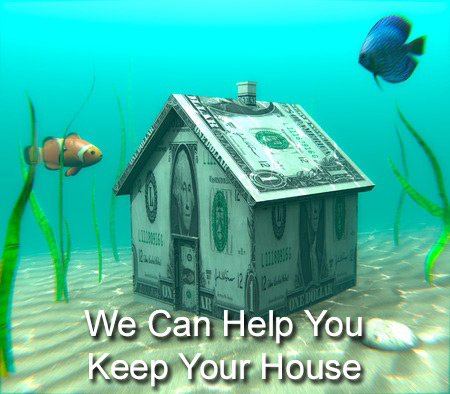 Thanks for submitting your question. You can accomplish different goals if you declare bankruptcy, so you need to consider all of the details of your lenders’ promissory notes and mortgages, along with your complete financial and credit position, to determine your best course of action.
This answer to your question does not consider your specific case, but covers the general issues involved in a situation like this. You may want to consult with a bankruptcy attorney to ensure your case is handled to meet your goals.
When you purchased your home you signed two pieces of paper with each lender – a promissory note and a mortgage.

When you purchased your home, you very likely made an agreement with the lender which says something like, “I agree to pay you each and every month on the promissory note and if I do not pay, then you can foreclose on my home.”
Foreclosure is the legal action of proving to a judge that you did not keep up your promise and asking permission for the court (through the local sheriff) to sell the real estate to the highest bidder at auction and “foreclose” everyone else’s interest in that real estate.
Please keep these concepts in mind as we very briefly skim the surface of bankruptcy.
There are primarily two chapters of bankruptcy that deal with consumer debts, called Chapter 7 and Chapter 13.
An individual only qualifies for a Chapter 7 if his or her income is low enough. With regard to a house with mortgages in Chapter 7, a debtor can usually do one of two things: 1) keep the home; or 2) surrender the home. If a debtor keeps the home and is current on payments, the debtor will usually “reaffirm” the debt by signing a “reaffirmation agreement.”

So to answer your question regarding a Chapter 7 – “Presuming that you do not have significant equity in your home, you are current on your mortgages, and your income is low enough to qualify for a Chapter 7 filing, you would be able to keep your home if you would like. The law requires that we list ALL your creditors, including the first and second mortgage lenders, in the bankruptcy (whether you want to reaffirm the debt or surrender the debt).
You would need to continue making payments on both mortgages if you wanted to keep the home.”
Regarding Chapter 13 – almost any individual can file a Chapter 13 bankruptcy (with certain restrictions that your attorney should know under Section 109e). Individuals must file a Chapter 13 if their income is too high, or if they filed a Chapter 7 in the prior eight years (or a Chapter 13 in the prior 6 years).
BUT, some people file a Chapter 13 for other reasons besides the mandatory ones, including, but limited to:

But there is another reason why someone MIGHT want to file a Chapter 13, and that is in limited circumstances we might be able to remove a second mortgage.

In a Chapter 13 bankruptcy, the law requires that you remain in Chapter 13 for 36 to 60 months, depending on your income, but when the case is complete you will only have one mortgage on your home – and yes you get to keep the home.
So, with all that being said, while we are available to answer any of your questions via phone or email, we would suggest instead that we meet in person to go over the details of such a complex issue. Feel free to send us an email or contact our office at 317-255-9915 to schedule a free consultation at one of our three convenient locations.

Our office often works with creditors to try and negotiate a lower settlement on claims and has reached great success. Our office oftentimes has a greater success in non-bankruptcy workouts because the threat of bankruptcy is always on the creditors mind when we negotiate.
Creditors know that our office has filed thousands of bankruptcies and that if they do not settle then there is a good chance that they will get nothing (or much less than we have offered).
In order to have a successful non-bankruptcy workout, we like to see a limited number of creditors (as any single non-cooperative creditor may ruin the whole deal for everyone) and a source of funds (such as borrowing from a friend or taking a hardship loan from retirement).
We recently had a client settle on four claims for less than $17,000 when he owed over $70,000. He did not want to file and was able to borrow from a retirement account. Our fees for saving him $50,000 was less than $2,000.

Filing for bankruptcy may delay (Chapter 7) or prevent (Chapter 13) you from losing your primary residence to foreclosure. If you are at a point where you need more information about the affect foreclosure might have on your ability to file for bankruptcy, you probably should contact us right away. We can help you.

Real estate property other than your primary residence may not be considered as exemptions in a personal bankruptcy case, but every case is different, so your situation would need to be looked at in more detail.
For a free consultation about your circumstances, please contact us.